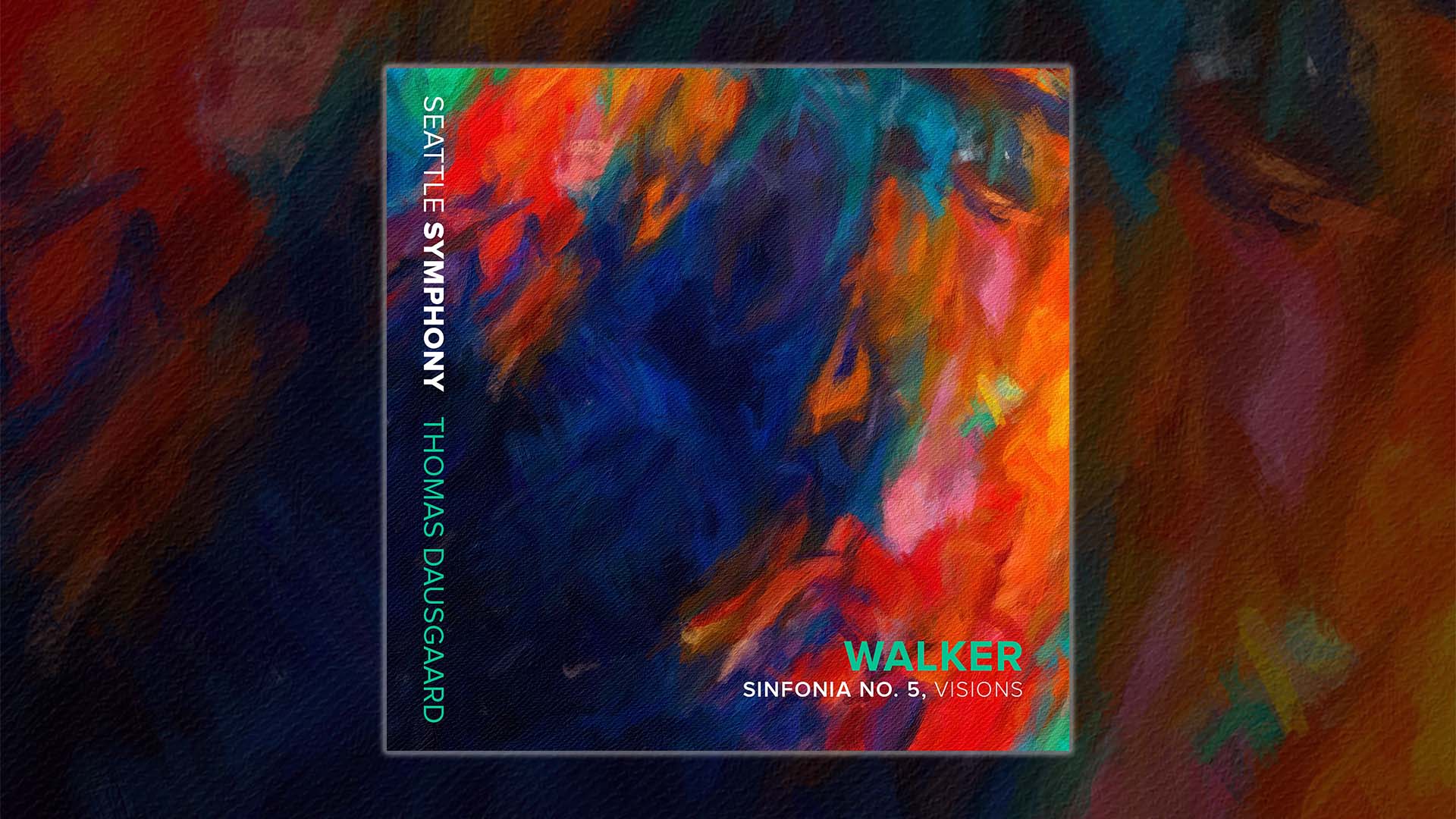 The Pulitzer Prize-winning Walker wrote this powerful work in 2016, partly in response to the horrific events of the Emanuel African Methodist Episcopal Church massacre in 2015. This restless composition — recorded in the stunning acoustics of Benaroya Hall — combines spoken text and orchestral music in a bold and impactful score.

Thomas writes, “With Walker’s very own musical style I imagine that he has first composed a long stretch of tense, organically evolving music, but then in a fury cut it up in shorter bits, threw them up in the air with a laugh, and then back in serious mood stitched them together exactly as they landed. The stark tension of the music is still there, but the collage of musical parts shout at each other, misunderstand or interrupt each other tumultuously as in an unpredictable tumbler of life. For me the title “Visions” refers to the sublime feeling at the end, realising that all these bits of music belong together – and maybe you can as in a “vision” sense how all its parts peacefully return to their original organic form. In that way Walker’s music is very modern: only through the reflection in us does it show its true soul: if we make a leap, we can bring peace.”

In advance of the world premiere performance in April 2019, Andrew Stiefel wrote of the work for Seattle Symphony:

“The massacre of nine church members at the Emanuel African Methodist Episcopal Church in Charleston, South Carolina in June 2015 resonated strongly with Walker, who had visited the city a few months earlier. ‘The horrific events that occurred there and elsewhere will always remain etched in my imagination,’ he told New Music Box in an interview with Frank J. Oteri.

“In response, Walker set to work on his Sinfonia No. 5, ‘Visions’. The music simultaneously looks backwards and forwards, processing contemporary events through the lens of history. ‘The music leaves many questions unanswered,’ says [Walker’s eldest son] Gregory. ‘It’s like there is a cognitive dissonance in the piece — optimism and fatalism together, the future still in the balance.’

“Completing the work was a challenge for Walker, but ‘he was completely committed to seeing it through,’ says Gregory. ‘It was difficult for him to compose by that point.’

“From the opening flourish in the orchestra, the music is agitated, restless, switching from idea to idea and rapidly through textures with outbursts of percussion declaratively punctuating each phrase. Starting about a third of the way into the work, Walker intersperses bits of narrated text throughout the music.”

In her review of the concert, Philippa Kiraly, of the Sybaritic Singer, writes:

“Visions, conducted…by Thomas Dausgaard, is a compact, complex work which conveys a great deal. Walker creates an aural image of lives interrupted, gentler sections often with an foreboding feel broken up by screaming discordance of drums, brass and other percussion. The work is emphatic, colorful. There are two versions of this work, the second one, performed here, has five vocalists as speakers at the side reciting words from an eclectic variety of writings and songs with veiled musical quotes, though none of the words were at all audible. A screen above the orchestra showed video of waves inexorably arriving on shore plus a slave ship and auction, cotton field workers, and more waves. The effect of the whole work is one of inevitability, restless apprehension and anxiety, but this listener opines that the first version, without speakers and video, would be equally effective.”

Digital downloads will be available through all major online music retailers and streaming services. High-resolution stereo and 5.1 surround files are available from Acoustic Sounds and HDTracks.